Sorry Elton John, I'm Endorsing Boy George for UN Secretary General
Harmony and me
We're pretty good company
Looking for an island
In our boat upon the sea
Harmony, gee I really love you
And I want to love you forever
And dream of the never, never, never leaving harmony

There's no question in my mind that Kofi Annan is on his way out as the U.N.'s generalissimo. But who should take his place? Perhaps you can guess who i would like to see as the next Secretary General.... 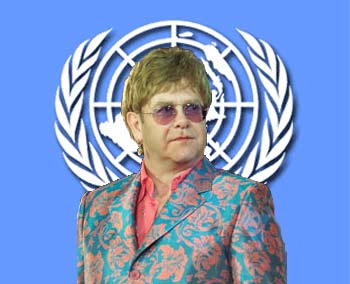 What the heck does a Secretary General of the United Nations do anyway? And couldn't anyone do it? And if anyone can do it, why not get Elton John? i think it's a great idea. Wouldn't he be just as good as anyone else?

Please join me in this crusade. Now that Dan Rather is quitting, i need a new crusade. You can help. Next time the subject of the United Nations comes up at work, mention to your co-workers that you think Elton John would make an excellent Secretary General. Word will undoubtedly spread to the right people. Also, if you like to call radio talk shows, why not mention it on the air? That'd get the word out even faster.

If you have a blog, feel free to copy and post my sidebar ad....

As usual, I am not trendy regarding this issue. Several people have already commented. An alternative candidate has already emerged:

As Kofi circles the drain, speculation begins to mount as to his successor...Annika is rooting for Elton John.

Personally, I think we should name John Wayne to the post....[M]illions of third worlders know him from his movies....Plus, it would really cheese the French.

I am sure some picky individuals will point out disqualifications, such as his lack of foreign policy experience or the fact that he is dead....

Decision '08 says that Elton John is an "interesting candidate."

However, Annika has convinced Little Miss Attila, merely by noting:

It's the way that he move, the things that he do, wo-o-o.

Well, with all due respect to the people above, I think that if we're going to nominate a UN Secretary General from the United Kingdom who...um...gets along well with men, I would like to propose an alternative candidate.

Now we're fighting in our hearts
Fighting in the streets
Won't somebody help me?

Yes, my candidate is Boy George. What does he offer to the UN?

So, let's keep Elton on Broadway and send Boy George to the UN Building.

annika said…
Have you ever seen those ear thingies they got at the UN? They're not really headphones at all. If you take the tour, you can actually go down into the chamber where the delegates sit and see them up close. They're hollow plastic devices that hang onto the ear. i'm sure the sound quality is not that good. Either Boy George or Elton John would probably make it their first order of business to upgrade the sound system to something with higher fidelity. And then would come the redecorating. Get the UN headquarters out of the sixties, man. i'd like to see more 80's day-glo personally.
Tuesday, December 07, 2004 1:16:00 PM

woman said…
This could be an issue, actually. I'm not sure they want to be able to understand everything the others are saying.
Tuesday, December 07, 2004 10:33:00 PM

Popular posts from this blog

Are We Better Off? Well, my last post was inspired by Clinton's "It's the economy, stupid" comment. Let's go back a few more years to the line that Reagan used with devastating effect against Carter. Buzzflash.com asserts that we are NOT better off today than we were four years ago. Politicians lie, but numbers don't. How does the economic record of Bush, Jr. (and Sr.) stand up against Clinton's on Unemployment, Job Creation, the Stock Market, and the Budget Surplus/Deficit. No one statistic paints a true picture, but taken together, life under a Bush is dark and not very prosperous. Of course, there was one question that Reagan didn't ask - will we be better off four years from now if we keep the incumbent, or insert the challenger? For example, would a Kerry presidency result in a significantly lower budget deficit than the Republican President and Congress delivered when they were in power? I don't have the answer
Read more

June 29, 2006
Remember how Hyles Anderson College offered a course of study in Marriage and Motherhood ? Well, I just double-checked their catalog to see if they offer a course of study in Fatherhood. There is none; in fact, the word "fatherhood" is not mentioned a single time in their catalog. Perhaps the college believes that virgin births didn't cease with Mary. Seriously, the college takes great trouble to train mothers, but doesn't believe that fathers need training at all. (Similarly, I didn't see any coursework for men to ensure that they have happy marriages; the job falls to the women.) I discussed the relationship between husbands and wives in a recent post in Word Search. For those who don't know, several of us are taking turns posting about chapters in the New Testament. One day I got to write about Ephesians 5. I skipped over most of the chapter and went right to one of the most controversial verses - verse 22 . Ephesians 5:22 (New International Ve
Read more

June 27, 2006
I can truthfully evaluate eHow's advice on "How to Calm an Upset Stomach Naturally." (I'll spare you the details - let's just say that I woke up late Saturday night, missed work on Monday, and was not on a boat . So, how was YOUR weekend?) Here are some excerpts from the eHow article , followed by my comments: Drink water with lemon juice. I didn't try this, but I tried a bunch of other clear (and not so clear) liquids. When I got tired of seltzer water, I switched to Coke for a while. I then drank water until I got tired of that, then switched to Coke again. Eat a banana. Just did. Take ginger. Drink ginger ale or ginger tea, add fresh ginger to a cup of hot water, or take it in capsules. I didn't have ginger ale this time around, but I've done that in the past. Easy remedy by eHow Friend Take Pepto-Bismol. This did NOT work. Had to go to Imodium for help. From the Ontario Empoblog (Latest OVVA news here )
Read more